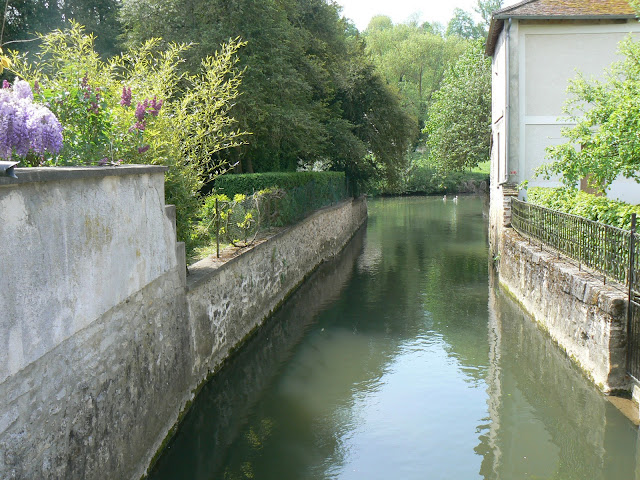 Yesterday was a cold, gray day, and I was doing a bit of daydreaming.

Instead of putting lights on my Christmas tree or vacuuming or doing laundry, I sat looking at photographs, inventing yet another house and garden in France where I would welcome friends and family from home.

My place would be on a canal where I could watch ducks paddle softly by.  I would have a garden with lavender and espaliered apple trees. There would be a weeping willow hanging over the walls, almost touching the water.  In the spring, I'd pick armloads of lilacs (not something we have a lot of here in Georgia) and big cabbage roses and peonies in June.  The French doors of my small house would lead out onto a terrace covered by an arbor of wisteria (which would not go wild like it does here) where I would host lunches of cheese and bread and carottes rapees.

This scene doesn't have my willow, but I think I can make out some espaliered fruit trees (those may be grape vines).  I like the color of the lilacs, too.  And there's a hedge.  I loved clipped hedges.

I took this photograph year last year when I spent a week in Paris in May with my dearest friend from childhood.  She rented an apartment on the Ile St. Louis, and we ventured out from there.  She had given me a guide book called An Hour from Paris, or something like that.  I chose this little village for a day's excursion, and after some harrowing moments in the wrong train station, we finally made it here as they were closing up the market, which was a disappointment.

But then we started walking along the narrow canals and crossing the bridges.  It was a beautiful day, and we walked to the edge of the town where a river flowed by.  On the other side was a pasture with an apple orchard and cows grazing serenely.  A plaque on an ancient house said Corot had lived there in 1873.

My friend and I are going back to Paris this June, so I'll keep looking for the perfect little village.  I'll  keep this one in mind.  I don't think it's the one, but I really like the idea of the canals around every corner.  At any rate, it's nice to think about fragrant lilacs and lavender and roses and a sun splashed garden while sitting here on a gray, wintry day.
Posted by Martha Smith Tate at 8:19 AM