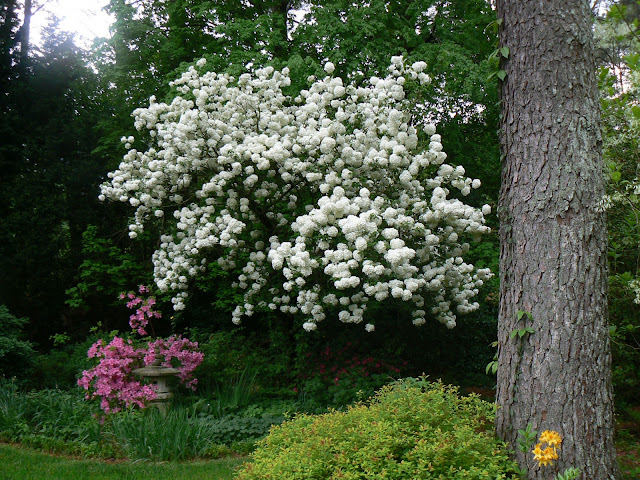 A rainy April day, and I'm once again in Margaret Moseley's garden.  Flowers are everywhere - down low, up high.  Everything is green and fresh.  Camellias and hellebores from the winter garden are still blooming here and there.  Tall blue scilla and a special purple-hued Phlox divaricata have popped up in the beds around tall trees.  Some of the large flowering clematis are out.  Azaleas - mostly in pastel colors - are in full flower along the wide grass paths.  Despite the steady rain, it's a magical place.

The tree above that looks like a hydrangea on steroids is technically a shrub - Viburnum macrocephalum.
It is the largest of all the snowball viburnums, with giant sterile flowers that sometimes measure eight inches across.  Margaret has at least two of these giants in her viburnum collection.

Viburnum utile 'Eskimo' in yesterday's post usually only grows to about five or six feet.  Viburnum macrocephalum can reach 20 feet in our climate.  This particular viburnum gives you a show for about a month.  First, the flowers that start appearing in March look like lime green half-domes.  As the season progresses, the shape becomes more round.  Then, you have a mass of mint green giant balls.  Finally, everything turns white.  It is nothing short of breathtaking.

One September, as I was driving carpool for one of my daughters, I pulled up to a house and saw a shrub I'd never seen before.  It was the oddest looking thing, with domes of cream-colored flowers.  The foliage looked vaguely familiar, but the leaves seemed to be pointing down.  All of a sudden it dawned on me that this was Virburnum macrocephalum, which will sometimes flower in September.  It hardly bears any resemblance to its springtime self, however.

Okay.  Any discussion of other flowering viburnums can wait until spring.  I just had to include the above photograph while snowballs were on my mind.
Posted by Martha Smith Tate at 8:49 AM