The purloined book - the mystery remains 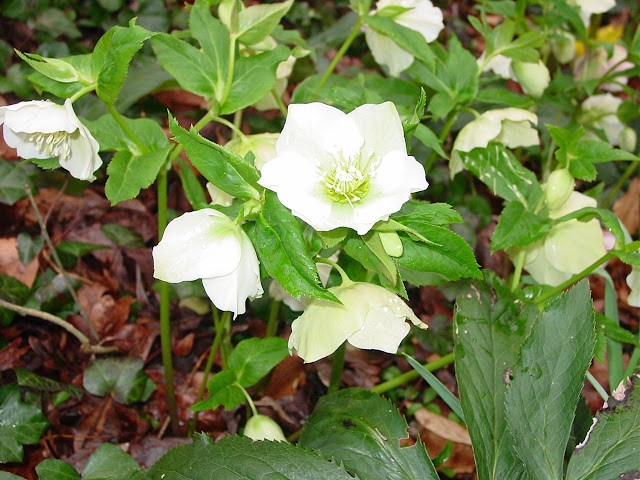 Margaret Moseley gave me this clump of pure white Helleborus hybridus (formerly orientalis), or the Lenten rose, one year in the mid-nineties to use in a display at the Southeastern Flower Show.  She also lent me her treasured copy of A Southern Garden by Elizabeth Lawrence.  Margaret had years worth of notes she'd made in the margins of her cherished book.  The copy was worn, but it contained a lot of Margaret's observations on her own garden.  She had underlined passages she liked and circled plants she wanted to try.

Elizabeth Lawrence was a garden writer from North Carolina, and her wonderful books, written in the mid-20th century (A Southern Garden was first published in 1942), have endured and are still highly readable today.  I think the edition Margaret lent me came out in 1984, but it could have well been the 1967 edition.  Either way, Margaret had personalized her copy, and it was loaded with good information, not only by Margaret's guru, Elizabeth Lawrence, but by Margaret herself.

I had placed the book on an antique iron table in the garden we created for A Gardener's Diary, representing four gardens we had featured on Home & Garden Television.  In Margaret's section were camellias, rocks representing the ones she'd picked up from the roadside to create her raised beds, daphnes, hellebores and viburnums.  A sign explained the garden and told of Margaret's admiration for Elizabeth Lawrence's writings.  The book was opened to the section, "Spring Comes in February".

One morning when I reported for duty at the display, I looked over and saw the book was gone.  We looked for it everywhere and finally concluded it had been stolen.

What puzzles me is this was not a pretty coffee table book.  It was a small, tattered paperback.  A person would have had to climb into the display in order to take it.  Only someone who appreciated Elizabeth Lawrence's writings or who knew about Margaret Moseley's wonderful garden would have wanted such a marked-up copy.  But then, such a person surely would not steal anything, much less something of  obvious personal and sentimental value.

I felt so bad.  I, too, had this edition and had written and underlined all over it.  I could easily have used my own book, but who would have thought?  I gave my copy to Margaret, and as the word got out, she received many other copies from friends.

But, it wasn't the same.  The new edition didn't look anything like the old one.  The cover was different, and even though the original chapters were all there, the book felt stiff and harder to hold and read.

I see that the clump of pure white hellebores (I have other white Lenten roses, but they have freckles) is heavily budded and about to bloom.  It was so generous of Margaret to dig these flowers from her garden to use in the display and then insist I take them home with me.  I just wish I could have taken better care of her book.
Posted by Martha Smith Tate at 11:04 AM