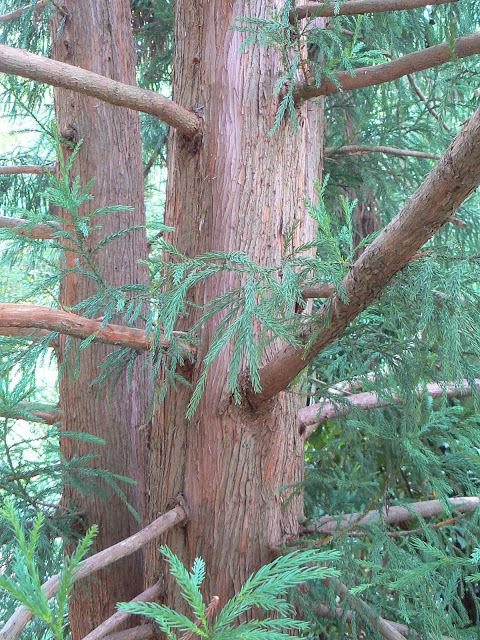 Years ago, at a small nursery on the Kitsap Peninsula in the state of Washington, I saw some ceramic tiles for sale. They said, "Not tonite, deer".  The owner said you could hang them in your garden to keep the deer away.  "It works about as well as anything," he joked.    Even though I had no deer problems, I chose a mustard colored one to give to a friend who did.

But that was then.  Now, I need my sign back.

The above photograph is of the magnificent bark of a Cryptomeria japonica 'Yoshino' that belongs to my friend Claire Crumbley.  It's at the edge of her beautiful garden out in the country south of Atlanta.

This big, handsome trunk is something I might never have.  Claire planted the tree in 1994.   If I subtract 1994 from 2011, that means that in 17 more years, I'll be quite old (who was it who told me, "You should never put off planting.  If you're going to be that old anyway, you might as well have a nice, big tree.").

Cryptomerias are super fast-growing, making them very desirable if you want something tall to screen your neighbor out.  I planted four several months ago.  They were nice and healthy and straight and about five feet high.  The caliper of the trees was not too impressive, but knowing their rate of growth, I figured I'd be cutting foliage for Christmas decorations year after next.

It was not to be, thanks to the bucks around here (I remind you that I live in the city limits of Atlanta; the deer arrived about a half dozen years ago).  I went up one day to find one of my trees broken in half.  Someone had scraped his antlers a little too hard.  The one next to it was missing bark as well, but it was still standing.

Then, on Friday, a tree crew came to take down a 100 foot tall pine tree that had started leaning toward the little cottage that was practically destroyed by my neighbor's oak on June 18th of this year.  Only a few feet away was one of my cryptomerias.  A crew member assured me that they could take down the pine without injuring the small tree.

After the last truck rumbled out of here, I went up to look at the site.  The top of the tree was gone.  I could see some of its foliage buried under the debris from the pine.  I was sick.  I went into my, "I should have..." mode.  I should have gotten them to dig the tree and move it.

But back to the deer.  I examined the broken-off tree and saw that a buck had rubbed it after all.  One side was completely raw.  I don't know if it would have made it anyway.

I know that bucks like little evergreens.  At the farm, just about every spindly cedar and pine along their route has been rubbed.  Same here, plus they've wounded many deciduous trees, too.  Why I thought my cryptomerias would be exempt, I don't know.

After the first wound, I put out some Milorganite (a fertilizer manufactured from Milwaukee sewage sludge; said to deter deer) around the trees.  That seemed to work for a while, but in the world of deer repellents, nothing is forever.  My best bet is to put up a deer fence.  Since I can't afford that right now, I need to get my sign back.  Otherwise, I have no hope for a cryptomeria as beautiful as Claire's.
Posted by Martha Smith Tate at 8:45 AM