A holly orchard in my future 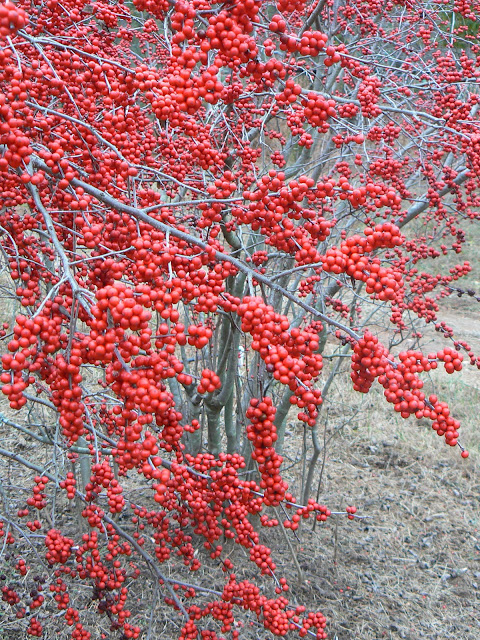 In the first couple of years of A Gardener's Diary on HGTV, I selected a garden, or really a holly collection, in Illinois for a winter show.  Bon Hartline, the man who collected the hollies, was a true character and well-known in horticultural circles.  He had hybridized some deciduous hollies, but even more interestingly, and totally unrelated, he built and flew his own airplanes.

Kathryn MacDougald, my trusty co-executive producer, went along on the shoot to direct the crew.  I had told her that I was booking them in a hotel where the Lincoln-Douglas debates had been held.  I truly misunderstood, as I don't think the two famous statesmen could have fit into the tiny Lincoln Motel, which consisted of a low, narrow strip of rooms on one level.  Also, neither Lincoln or Douglas was around in the 1940's when the modest motel was likely built.

Kathryn was not happy about my selection of accommodations, nor was anyone.  Of course, a strip motel had nothing to do with any debates.  However, it was popular with the goose hunters who started their day at 3 a.m., and were outside revving their motors and shouting to each other while the host of the show, Erica Glasener, and the crew tried without success to sleep.

We didn't have cellphones back then, so Kathryn called me from the local Walmart to say they were out buying warm clothing.  It was sleeting and frigid the morning of the first two days of shooting.  Perfect, I said, for a show about hollies.  Very wintry.  That's the atmosphere we want.

When they returned home, I was delighted with the show they came up with.  Bon walked Erica through holly orchards, both deciduous (ones that drop their leaves) and evergreen.  The sleet coming down changed to a light snow.  It was magical.

But then, Bon got Erica to climb into one of his little planes on his grass runway.  I could tell by the footage that when he pretended to rev up the engines and start down the strip, she was terrified.  Luckily, the takeoff didn't happen.

That was at least 15 years ago, and Kathryn has never let me forget the sleet or the Lincoln Motel or the goose hunters.  But since seeing that show, I've wanted a holly orchard.  Well, the other day, I got started.  Better late than never.  I bought one Ilex verticillata 'Winter Red' and the male holly that pollinates it - 'Southern Gentleman'.  Now, I'm irritated that I only bought the one female holly.  Two plants do not an orchard make.  The nursery only had three more, so I've got to call and see if they have any left.  They close on Friday for two months.

All this to say that I am going to plant the two hollies (I'll keep my fingers crossed for more) next week.  They will go in a sunny spot in a river bottom garden at the farm where there is a deer fence.  I'll worry about the birds when the time comes.  For the moment, I'll enjoy the expensive cut stems I bought and think of my future orchard where I'll be walking along (not in the sleet, I hope), selecting berries for my Christmas decorations.
Posted by Martha Smith Tate at 3:17 PM