A garden's evolution just outside Paris 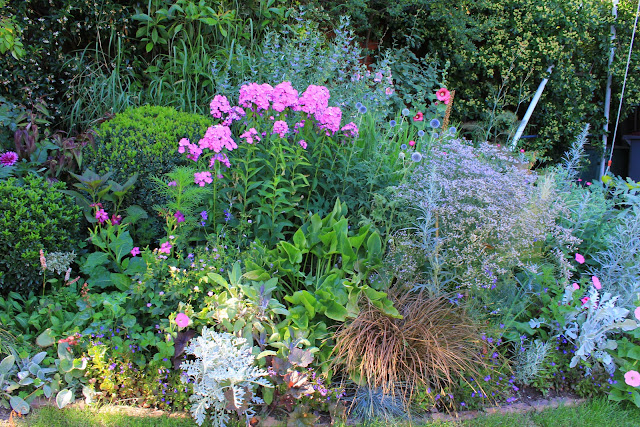 In The French Connection, posted on this site on October 4, 2011, I gave an introduction to the garden of my very witty and charming South African friend Carol, whom I met at a ski resort in the winter of 1971.  Carol married Luc Tessier, an architect from Paris, and has lived in France all of her adult life.  For 20 years, she worked at the Louvre, doing workshops for children.  Her young charges would spend an hour in the museum in front of paintings and an hour doing practical and creative work.  Carol also worked with mentally handicapped adolescents and adults.  She published several books, one of which I own (Histoires d'enfants dans la peinture francaise).

Carol is from Johannesburg, and grew up in a gardening family.  According to Carol, her mother, though greatly interested in their multi-acre garden, was the type to stand with her "impeccably painted nails and diamond ring, giving out instructions on what to dig or do".

Although Carol has fond memories of her father and the olives he grew and prepared from the garden, it was her beloved grandfather Bonkie who was her greatest inspiration.  "...I think my real love for gardening came from Bonkie who had a very wide knowledge of plants. When I was about five he remarried and moved to a wonderful large garden not far from us, where I spent numerous weekends pottering around with him and feeding the birds.  I have a special soft spot for hellebores, as Bonkie had a wonderful collection.  He had originally brought the seeds out from England, and I later managed to bring some of his hellebores (hidden in a suitcase) back to my garden in Asnieres."

Carol says her own garden, which is about the size of "a large Wimbledon tennis court", has evolved over the years.  She and Luc originally decided on the shape of beds by laying out hosepipe and looking at the result from an upstairs window.  At first the back of the garden was wild, and her three girls delighted in playing among the lilac bushes.  Eventually, this area was tamed.

She's had to use restraint, Carol says, as her memories of the large South African gardens tend to make her try and pack in too many plants in the given space.  In fact, she says they're often so close that they literally suffocate. "Luc says that he would prefer not to be a plant in our garden!"

Carol took the above photograph of a section of the garden in summer (I'm guessing, because of the pink phlox in full bloom).  Luc may have a point about the crowding of plants, but Carol's artistic talent definitely translates to the garden in this beautiful composition.
Posted by Martha Smith Tate at 10:50 AM