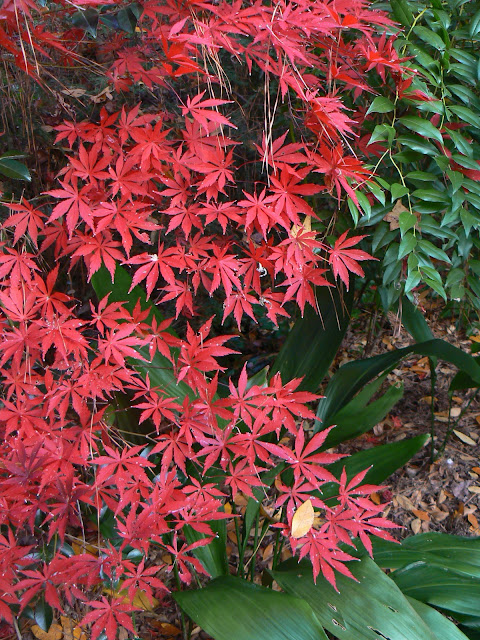 A Japanese maple down the street holds its leaves well into December when it turns a brilliant red.  Others, like the seedling-grown tree next to my side door is totally bare now. When I talked to Japanese maple collector Bill Hudgins last month, he said this was an unusual year.  Many of the trees had turned early, while others still looked like full summer.

I captured this scene in early December one year - Christmas colors in nature.  The cast iron plant at the lower right stays green all winter.  The trick to growing it is to make sure it's in at least medium to heavy shade.  Put them in a lot of sun, and the leaves burn and turn yellow.  I have one plant that was rescued from a site about to be bulldozed.  It's doing okay now, but the deer decided to sample it a couple of years in a row.  So far, this year, no one's partaken of the dark, striated leaves.  Northerners would know this as a house plant.

At the top right is a plant I love.  Florida leucothoe has been renamed Agarista populifolia from Leucothoe populifolia.  It's one of the few broadleaf evergreens that works in heavy shade.  In fact, it needs to be in shade to maintain the dark green color as shown above.  The shrub is native to the Southeast, especially in the deep South where it grows along streams.  At our church, we use the foliage from a Flower Guild member's garden.  She has a 40 foot long hedge.  The foliage lasts so long that we can use it from week to week.  The only drawback is that the hedge is pruned in early spring, and the new growth is too fresh to last in arrangements.  I just read that this leucothoe is easily rooted in summer.  I've got to get this going, as I have plenty of shade and would love to be able to cut the long, arching stems for arrangements.

Here's the only drawback.  Cast iron plant grows great in places like Charleston, New Orleans and Savannah.  It does well in Atlanta, too, but it can be hurt when we have wild dips in temperature in winter.  My plant did survive a cruel cold spell a couple of years ago when the fig vine on a wall was killed to the ground.  Florida leucothoe fares better, but I don't think we've been tested since the early 1980's, when two years in a row, we went to below zero degrees.  Dr. Dirr says it will grow from Zone 6 or 7 to Zone 9.
Posted by Martha Smith Tate at 8:27 AM