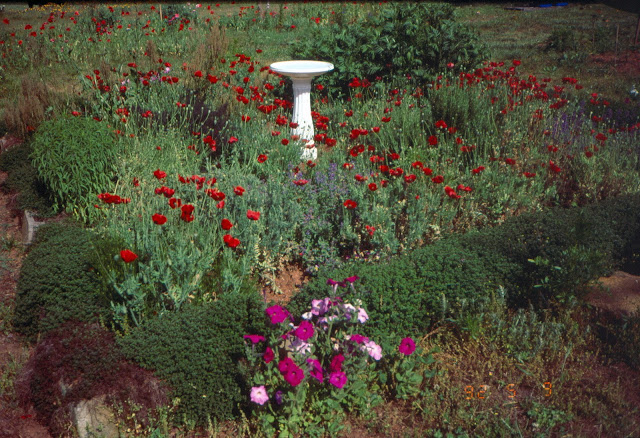 Dear Uncle Claude,
It was so great to talk to you on this Veterans' Day.  You and I were on the phone at the 11th minute of the 11th hour of the 11th day in a year that ends with 11.  You sounded so good, so sweet and friendly and caring, as always, and you called me by my name.  I can't tell you how much that meant to me.  Aunt Wynette tells me that you won't remember our conversation, but that's okay.

The picture I've posted today is of Flanders Field poppies in a Georgia garden.  I noticed the Duke and Duchess of Cambridge were wearing plastic ones at a benefit last night for England's National Memorial Arboretum.  You, of course, served in World War II, but the poppies are a reminder for all veterans everywhere that we'll never forget your bravery.

I am so happy to have a DVD of an interview with you, conducted by Georgia Public Television for their World War II veterans' project. The only thing is that you didn't tell the really horrible things that happened.  You were so humble and never took any credit for your great courage.  Nor did you complain about all you endured.

Until the last decade (you are 88 years old), you never talked about what happened to you during the war.  I found the letters you wrote to your mother (you were the youngest of nine children, born when your mother was 43 years old).  My grandmother never knew what you were really going through.  You told me a couple of years ago that you didn't want her to worry.  Not once did you say that your feet froze as you crawled along the ground in the cold forests of the Vosges Mountains in eastern France, hoping to avoid the Germans whose shouts you could hear only a few yards away.

I won't go into the terrors you experienced as you made your way all the way to Berchtesgaden or how you came to have the swastika armband of an SS officer.  You were so young, from the community of Rico in the Georgia countryside,where there was only a crossroads with two churches and a one-room country store.  And, to think how many there were just like you.

Okay.  You would not like all this maudlin carrying-on.  I will, however, say how much my mother and her six sisters and brother all loved you, as well as your son and daughter and grandchildren and great-grandchildren and your many nieces and nephews.  You have been the executor of so many wills and have carried out the wishes of your aunts and sisters and have been the backbone of my mother's large family.  You and Aunt Wynette have comforted all of us when we've needed your strength.

So, I think of you today and am grateful for you and for everyone who has served in the armed forces.  Thank you so much.

Your loving niece,
Martha
Posted by Martha Smith Tate at 9:26 AM