Staying home for the ginkgo 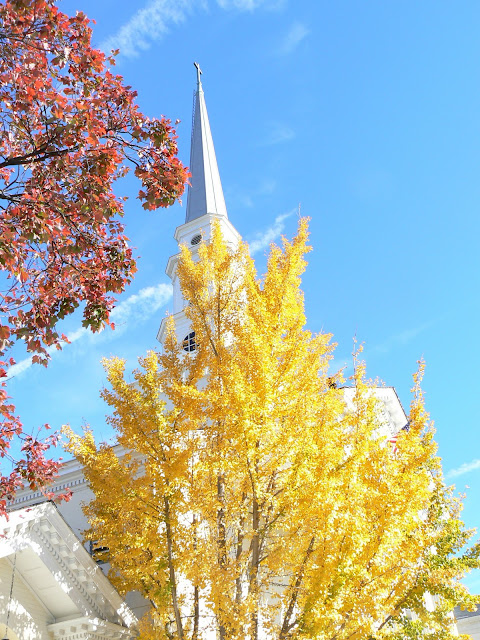 Margaret Moseley has dug in for the duration, and nothing can pry her away from home for the near future.

"Everybody who knows me knows I will not leave home this time of year until the ginkgo leaves have fallen," says the 95-year-old, whose garden has been the subject of television shows and has appeared in magazines, newspapers and books.  "I'm not going anywhere, even to get my hair fixed."

What is this about?  Margaret planted a ginkgo tree right outside her large sun porch around 30 years ago. "It was about the size of a broom handle, about three feet tall," she recalls.  "It's now over 40 feet high.  My friend Cy says they are slow growing, but mine just took off."  Every November, the leaves turn a bright gold and then all at once, within an hour's time, they fall to the ground.

"It starts with just one leaf coming down," she says.  "And then, there will be three, and that's when I know that they are all about to fall.  If you see that one leaf, you'd better find a comfortable chair because you're about to see a show.  One of my daughters happened to be over here one year when the leaves started falling.  She went out there and stood while they just rained down on her.  She couldn't believe it."
Several years ago, a pine tree crashed down in Margaret's yard, taking out one side of the ginkgo.   "Everybody in Atlanta knew it, because I called them up and told them about it.  I cried for days.  But now, you can't even tell it ever happened."
Yesterday, as I was driving around, I noticed the ginkgo trees around town had turned yellow.  This morning I called Margaret to check on the progress because last night, it rained, and today is gray and windy and cold.
"It looks like the sun is shining out there, it's so bright overhead," she told me.  "It's the prettiest thing you've ever seen."
Margaret estimates that the leaves still have at least a week and a half, because some of them are still green.
"My daughter has invited me to Thanksgiving at her house, and I've already warned her.  If the ginkgo leaves haven't fallen, I'm not coming.  I wait a whole year to watch this happen, and I'm not going to take a chance.  I'll just stay here and eat a peanut butter sandwich."
Note:  I took the above photograph several years ago at my church, Peachtree Road United Methodist in Atlanta.  I'm taking my camera this Sunday in hopes of capturing the tree before the leaves fall.
Posted by Martha Smith Tate at 9:43 AM