Obsessed with an American native 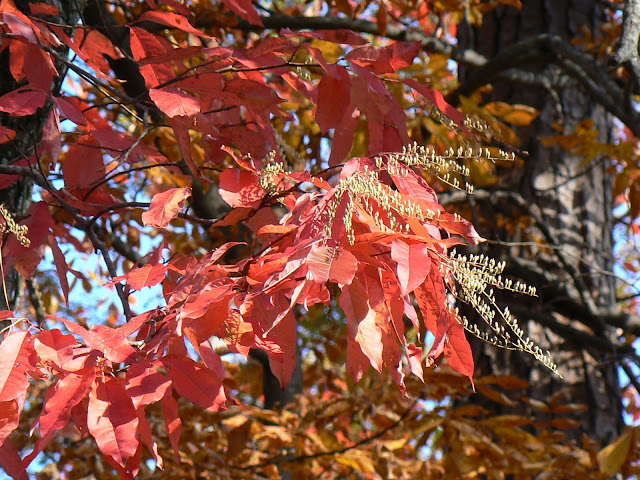 If only I'd had my camera with me on Monday afternoon at approximately 5:15 Eastern Standard Time, I would have finally gotten my picture.

Every day for three months, I've pulled out of my driveway to admire my favorite native tree, the sourwood (Oxydendrum arboreum), in its glorious autumn color.  On my property, I have several sourwoods, but they are all very tall, so I don't have a prayer of getting a decent photograph.

But the one on the edge of the neighbor's woodland, right across from my mailbox, is within the camera's zoom capacity.  You just have to be there at the right time, because if the sun is not shining at the exact angle, it doesn't work.  I came close with the above photograph, but the ideal time would have been that moment when the afternoon sun was shining on the luminous red-orange leaves, and you could see the cream colored flowers still clinging from the month of June when they first appeared.

I don't recall what year it was that I discovered the beauty of the sourwood tree, but I was late to the game.  Once I saw there was a tree that bloomed in June with cream-colored, bell-shaped panicles on glossy green leaves, I couldn't believe I'd never noticed it before.  And then, I started seeing them everywhere, especially on trips to north Georgia (sourwoods are native over a wide range of the eastern U.S., from Virginia and Ohio over to southern Illinois and down to the Gulf Coast).

The sourwood is the first tree to turn, usually by August.  The color persists well into November, so you have months of fall color that is either the color above or deep red that is sometimes splotched with purple (like one of the trees I stalk up on Ridgewood Road).

Speaking of the latter, if my dog knew to be embarrassed, he would have been ducking down the other day while I was parked on the side of the road.  I kept dashing out into the street to get my shot.  It really wasn't any good.  Cars kept coming, and it was beginning to get dangerous.  Plus, I noticed that people weren't exactly smiling as they passed by.  Surely they would have been more cordial if I could have told them that this was a special tree, one they'd be obsessed with, too, once they'd come to appreciate its great beauty.

More facts about sourwoods:  Sourwood honey is highly prized; the panicles are fragrant;  it is also known as lily of the valley tree; if you travel along the back roads of north Georgia in late June, you'll notice the trees in bloom; it's said if you chew the leaves, it relieves dry-mouth, but since there's a laxative effect, that may not be a good idea.  Mike Dirr says this:  "Truly an all season ornamental...many gardeners feel, among native trees, this is second only to Flowering Dogwood; certainly one of my favorite trees...".
Posted by Martha Smith Tate at 8:42 AM