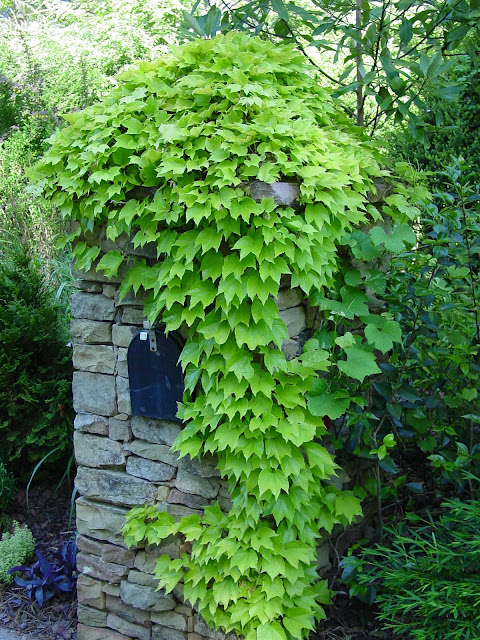 Finally, I am able to look at the above photograph of this beautiful chartreuse version of Boston ivy and not cringe.  But, it's taken me a while.

Back in the era when I depended on catalogs and books for plant information, really before we were googling everything, I wrote something that was totally wrong in my column in the Atlanta Journal and Constitution.  Before that day, I had made mistakes (misused the word "peltate", said a tree was an oak, when it was really a pecan, etc.), but nothing like this.  I still remember the sting of embarrassment over making such a glaring error that it caused an uproar among readers.

Here's the story:  My husband died suddenly of a heart attack in 1999.  He had many passions, but at the top of the list was baseball, and at the top of that list was the preservation of Fenway Park, the venerable home of the Boston Red Sox.  He was beside himself that the old ball park was in danger of being torn down.  He wrote letters and talked to anyone who would listen.  He even had a bumper sticker on his truck that read "Save Fenway Park".
He was such a devotee that the evening before he and I were to take our daughter to St. Paul's School for the first time (she was going into 9th grade and was petrified over the whole boarding school idea), the three of us sat shivering in the misty cold to watch the Red Sox play, so he could experience Fenway Park.  A couple of years before that, our family was touring Boston, and he had begged a worker to let us into the ball park even though there was no game.  My husband showed us the famous left field wall known as the Green Monster and explained that it was so high a player could be robbed of what would be a home run at any other ball field.  I took a photograph of him pointing to the Green Monster.  He framed the picture and put it on a shelf in his library.  I must have looked at it a zillion times.
Fast forward a handful of years after his death.  I was looking through one of my favorite catalogs and saw a chartreuse form of Boston ivy called 'Fenway Park'.  I went crazy.  What a great plant to have in his memory.  I could put it on the wall of the family cemetery in Tate, Georgia.  Also, I was excited about introducing a fabulous new cultivar to readers of the AJC.
I found someone who had a good specimen so I could take a photo (on the above mailbox) to go with my column.  But here came the error.  The writer of the catalog said the plant was a sport from the Boston ivy growing on the Green Monster at Fenway Park in Boston.  I repeated the information.  It never occurred to me to verify the story, nor did I think to look at the picture of my husband.  I did think about how pretty the Boston ivy was at Wrigley Field in Chicago and how Cubs fans valued the vine, even though at times balls had gotten stuck in the foliage and caused problems with plays.
But that's all the thinking I did.
The paper came out on Thursday, and the e-mails started. The Features editor called.  The "Corrections" editor called.  There was no vine on the Green Monster and never had been, one man informed me.  A woman wondered if I had gotten Fenway Park mixed up with Wrigley Field.  Another irate man said you never call a ball park a "stadium".  Even his eight year old son knew better (I used "field" and "ball park", but I also used "stadium", as the writer of the catalog had done).
I called Dr. Michael Dirr, who was kind, but said he knew the minute he read it that the information was wrong.  He gave me the telephone number of the man from the Arnold Arboretum who had discovered the sport so I could write a correction for the paper.
The real story was that Peter Del Tredici, a senior research scientist at the arboretum, was walking to a baseball game with his son in September 1988.  He looked up as the sun was setting and noticed that some of the Boston ivy on an apartment building a few blocks from Fenway Park seemed to be glowing.  The lower portions of the vine were the typical dark green, but the leaves up high were bright yellow.
A few weeks later, Del Tredici obtained cuttings. When he determined that the plant was stable and would hold its color (depending on the exposure, either chartreuse or chartreuse/yellow), he sought permission from the Boston Red Sox to name the vine 'Fenway Park'.
I'm glad to say that I'm just about over the incident and am ready to buy the vine (sorry to say, I can't plant it in Tate due to a family feud over spaces in the cemetery).  But guess what.  When I looked on-line, there it was - the exact story about its being a sport from the Boston ivy growing on the Green Monster.  That's okay.  At least Parthenocissus tricuspidata 'Fenway Park' is still for sale.  And, maybe all those readers no longer remember the lady who "needs to go to a Red Sox game so she'll know what she's talking about."
Posted by Martha Smith Tate at 6:59 AM