A last look at fall color 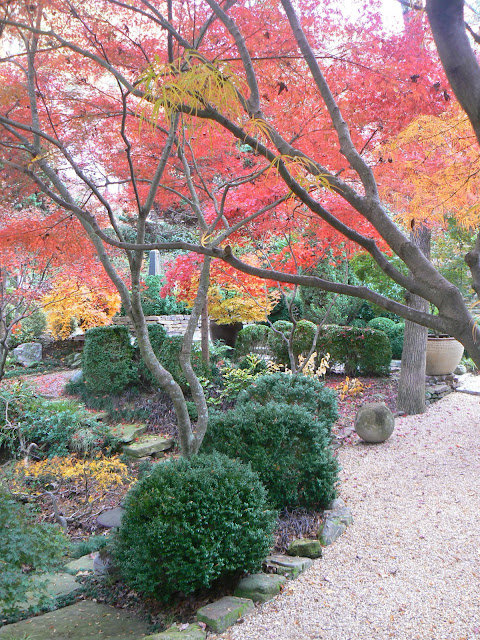 The leaves are falling fast now, with just some of the Japanese maples and oaks holding on.  And the beeches - they've already turned a dark tan color.  Later, towards spring, the latter will bleach out and take on a silvery hue.

But for now, there's sort of a last gasp before Thanksgiving.  This is, once again, Bill Hudgins' garden in Atlanta.  I talked to Bill recently, but never got over to make any photos this year.  He said the trees were turning at different times, not like last year when so many of his Japanese maples were in their full glory all at once.

Earlier in the fall - maybe it was even in late summer - I received a call from a national garden magazine. They asked me to send pictures of Bill's garden, and I did.  They called back to say they definitely wanted to do a photo shoot in his garden, that they would contact Bill.

It never happened.  I guess they just never got around to it.  I still have several photographs of Bill's garden in fall I haven't posted, so I'll save them for next year. I definitely want to show what his garden looks like in spring.  He's going to be on tour in May when all the hostas and ferns are out fresh, and many of the Japanese maples will still be in their spring color.  That's when all the textures he's put together are at their best.

I just love the above scene that shows one of the many paths that crisscross Bill's garden.  As gorgeous as those trees are (check out the finely cut yellow leaves in the upper foreground - amazing), they look all the better because of all the evergreens.  The stone and gravel and especially the beautiful bark all add to the composition.  I can't think of a better photograph to illustrate this beautiful season that seems to have, once again, passed so quickly.
Posted by Martha Smith Tate at 4:45 PM