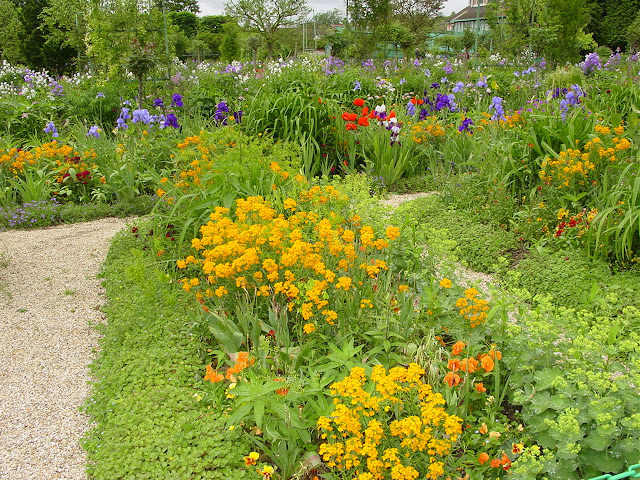 A friend of mine went through a phase of telling me what she had dreamed the night before.  You may agree that there's nothing harder to listen to than someone's stream of consciousness tales that make little sense.  My eyes would glaze over the moment she said, "You'll never guess what I dreamed last night." (Not to worry; this was long ago, and the person isn't reading this).

I mentioned in yesterday's post that I had a recurring dream (please, don't yawn) that I had a garden packed with sunny flowers.  It was a small garden, but I would go out and pick armloads of larkspur (don't know why that particular flower).  At the end of the dream I would discover that the garden really belonged to Ruth Mitchell, who in reality had acres of flowers around her 19th century farm house (the pilot for A Gardener's Diary on HGTV was shot in her vast garden).  I never knew what the dream meant.  It probably had to do with the fact that I longed so for full sun and had only shade (I now appreciate what one can grow in the latter, having seen so many great shade gardens).

There are so many types of gardens I admire and would like to have.  The above photograph was taken in Monet's garden at Giverny.  Oddly enough, this is not the garden of my dreams, although I would wish to be able to grow all those flowers.  I would need a little more green structure to reign in the chaos.  I think this is because I am such a disorganized person, always longing to be neat, but never am.

Anyway, yesterday's post showed a stiff, formal garden, so I thought I'd counter it with an opposite look.  Both are in France and couldn't be more different.  Given a choice of the two, I'd take this one, of course.  But, I'd definitely borrow some of the green borders from that stiff, formal garden in Paris, just so I would feel a little less chaotic.

Note:  I've tried to focus in on which flowers are in this photograph.  Here's what I can discern:  cherianthus (the orange which dominates), sweet william (one of the dark reds, but I'm not positive), hesperis (dame's rocket), poppies, iris, creeping jenny, lady's mantle and pansies.  The white in the background has me stumped.  I have a photo of a single white rose, but it's over by the lily pond.  In another view, I can see lots of white hesperis.  That may account for some of the white.  I tried to zoom in, but it was too digitized for me to figure it out.  Any ideas?
Posted by Martha Smith Tate at 8:43 AM