A hybrid camellia through war and peace 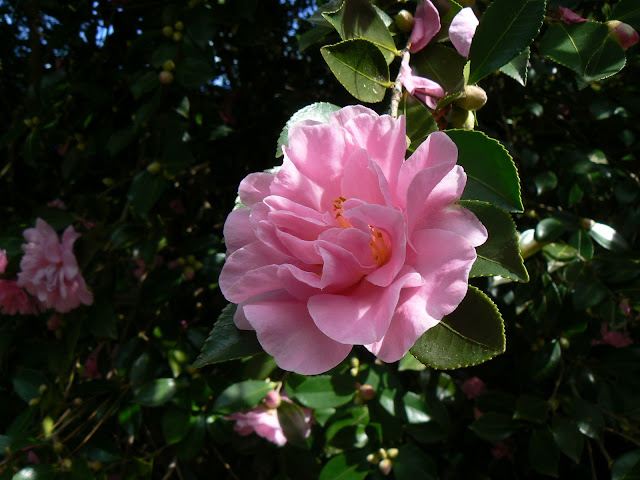 This beautiful hybrid camellia,  C. x 'Showa-No-Sakae', blooms in fall along with the sasanquas.  It was named in honor of Emperor Hirohito of Japan (1901-1989), meaning Glory of the Showa (Showa indicating the Era of Enlightened Peace beginning with the ascent of the emperor in 1926).  It is actually a very old Chinese/Japanese hybrid which was brought to Europe by Dutch traders in the mid-19th century.  It was officially named in Japan in 1928.

So, where is the irony in all this?  Probably in my mind, as someone who was born four years after Pearl Harbor and who spent her early childhood years being terrified that the Japanese would attack us again.  Maybe it was the fact that so many war scenes were shown at the movies.  Or, perhaps it was the long summer days my brother, three years my elder, would invent war games and terrify me, telling me that the plane that had just passed over our house had an orange sun painted on the wings.

But that was long ago, and really the only irony is that this innocent flower, which is named for "enlightened peace", lived through some of the worst times of war - the Japanese invasion of Manchuria and and then Pearl Harbor and the horrifying atrocities of World War II.

Let me assure you that my fear of the Japanese and the names Hirohito and General Tojo - the latter much scarier - only lasted from about the first through the third grades.  My first grade class picture shows us all wearing dog tags, when we practiced what to do in the event a bomb was dropped.  I didn't know any better that it was the new Cold War and the Soviets that I should be afraid of, and not the Japanese.
I am very off base here and am rambling indeed, but this thought process started when my 95-year-old friend Margaret Moseley pointed out this flower in her garden (she did not hesitate a beat in telling me the name of it, spelling it out for me to write down).  I'm always interested in the provenance of a plant, and I immediately raced home and looked up the history of 'Showa-No-Sakae'.

The important fact here is that 'Showa-No-Sakae' is an excellent plant to espalier against a low wall.  Some of the flowers on Margaret's shrub were semi-double with bright yellow stamens.  Others were very double, like the one pictured above.  All were beautiful and were more reminiscent of the sixty-odd years of peace we've had with Japan since the end of World War II than any of the times that came before.
Posted by Martha Smith Tate at 9:17 AM