What we know about this rose 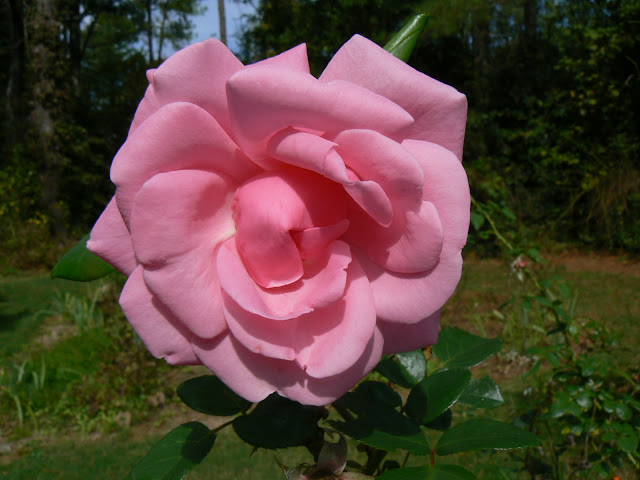 My gardening guru Margaret Moseley, age 95, has grown the above rose since the early 1970's.  Not one time during all those years, Margaret says, has there been any black spot on the leaves.  The rose blooms from late April until the first frost.  I took this photograph on October 23rd.

Margaret got the rose from her aunt in Veazey, Georgia, (near Greensboro) where Margaret was born.  Her aunt said the rose belonged to Margaret's grandmother, Lula Channell.  It is not known where Lula obtained the rose, whether it had been a gift or if it was a passalong plant from a neighbor or friend.

This is one of those "near-miss" stories.  When Margaret went to visit her aunt, she said Margaret ought to propagate the rose, since it had belonged to her grandmother.  Margaret took a cutting home and stuck it in the ground next to an outside faucet.  The next spring, she looked, and on the eight inch high "stick" was a bud.  "I was so excited that it had lived," says Margaret.

As for the age of the rose, Margaret can't remember the exact year her grandmother died, but it was sometime in the mid or late 1940's.  The rose was likely in Lula's yard well before then.  Also, her aunt had grown the rose for many years before Margaret obtained the cutting.

From that one rose, Margaret has rooted dozens and given them away.  Her friend Jean Jones, who moved her plant from Stone Mountain to Dalton, Georgia, raves about the rose, how it is always full of blooms and has never had any disease or insect problems.  When Jean had a double knee replacement recently, her daughter brought her a big bouquet of the mystery rose.
So, what is this rose?  Margaret says two men who were rosarians came to her garden on a hydrangea tour one year.  They were fascinated with the flower, but couldn't identify it.  Because of its characteristics - long stems, pointed buds, fragrance, great for cutting and a long blooming season - Margaret believes that it is some kind of tea rose.

"I've rooted worlds of them," says Margaret.  "Everyone who has it loves it.  We just don't know what the name of it is."
Posted by Martha Smith Tate at 9:34 AM