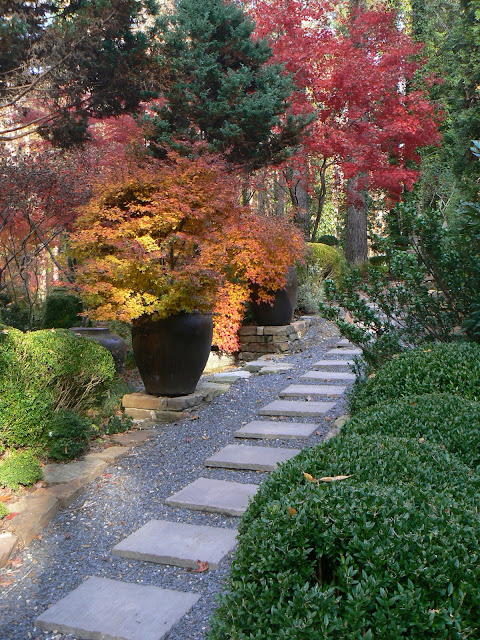 Here we are, back in Bill Hudgins' garden (check out the post for Thursday, August 18, 2011, and for Tuesday, October 11, as well).  Since yesterday, I looked back at some facts about Bill.  He grew up in Barnesville in middle Georgia and had his own greenhouse by the age of 14.  He began growing ferns for florists and would put them in fancy wire baskets so he could charge more.   He wanted the money to buy more and more plants.  He experimented with vegetable gardening and growing unusual things from seeds, but he soon discovered there was no market for 15 kinds of exotic peppers in his isolated town.

By the time he was in his early 20's, Bill had acquired his first Japanese maple from a man out in the country.  It was love at first sight, and before he knew it, he had 100 different kinds crammed onto a small lot in Decatur where he had moved.

He gave up his beautiful and much photographed garden there to move to northwest Atlanta where he is now.  The original three acres (he's acquired more property now from neighbors) had lovely hardwoods and a wide, rocky stream that resembled something you'd see in the mountains.  Bill carefully carved out paths and added to the native mountain laurel that was there.  He also left a huge azalea that had been planted by the former owner.  He renovated the house and added on.  The before and after pictures are not even recognizable.

Bill moved the 100 maples from Decatur, and only one didn't make it, but he still has the first tree he purchased.  A collection of boxwoods which are planted throughout the property create a dark green backdrop for the maples.  He also has drifts of ferns and hostas and many, many large containers, which are set along the paths and hold Japanese maples and other shrubs.

I have many other photographs I want to share, so I'll tell the rest of the story as we go along.  Bill has recently made some changes;  I'd be curious to see if you can tell where his latest influence is coming from.

But about this photograph.  If I am not mistaken,  in yesterday's view I was standing just in back of the second large container on the left, looking back towards the bottom of this scene.  At any rate, it's the same area, but with a very different ambience.  To my mind, it's beautiful both in spring and in fall.
Posted by Martha Smith Tate at 6:06 AM