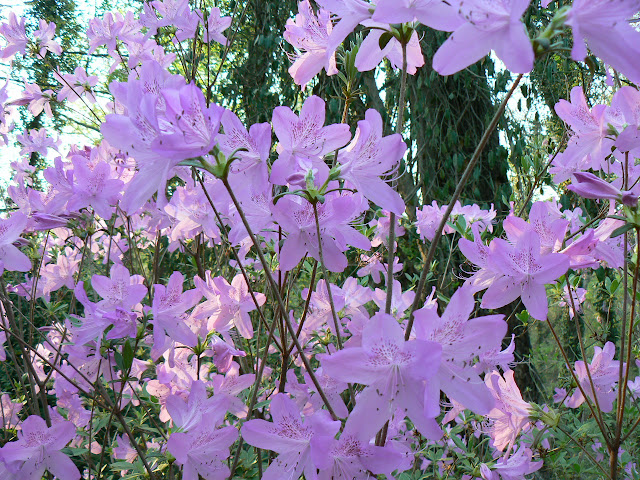 After college, I hung out with a friend known as Peter Rabbit.  I was not the originator of that nickname, but his name was Peter, and his last name started with an R, so I assume that's how it got started.

Peter loved exploring woods.  He knew a lot about native plants, and tromping through the woods with him was like being on a treasure hunt.

There was one particular woodland not far from my hometown (he was from the next town up the road) where we would explore in the spring and again in the fall.  It was mostly a deciduous forest, and you would see all kinds of flowers and interesting plants.  It's too bad that I didn't know a trillium from a dog's tooth violet back then, but I did appreciate the introduction to the miracles of the forest floor.

My husband knew Peter's brother, so after I was married, Peter became a frequent visitor.  One evening, he came to dinner and brought us a wedding present.  It was a fragrant azalea, he said.  I'd never heard of such a thing.  Sure enough, the next spring when it bloomed, the big, orchid-like lavender flowers did have a slight, very pleasing fragrance.  At the time, I was not very interested in azaleas, so I didn't even pursue an identification.  I just knew that everyone who saw it thought the flowers were exquisite.

It was not until I was writing for the newspaper that I knew the name of this early flowering azalea.  I was doing an article on a man who did bonsai, and he had the same plant.  He called it the Korean azalea, Azalea poukhanense (the official botanical name is Rhododendron yedoense var. poukhanense).    Native to south Korea (including the area around Mt. Poukhan), the shrub is semi-evergreen (deciduous for me).  About two to three weeks before most azaleas bloom, it produces relatively large, see-through lavender flowers with darker spots.  It is exceptionally beautiful and sometimes fragrant.

"The Peter Rabbit Azalea", although not an American native, has brought great beauty and joy over the years.  Every spring, I pick armloads of flowers and bring them inside.  But, just this past year, and I fear it was after June (when blooms for the next year are set), a newly hired yard helper decided the Korean azalea was way too big (it was; it was blocking a path, but I couldn't bear to cut it back and just walked around it).  It's now a shadow of its former self,  but it's been in that spot for 38 years and still looks healthy, albeit very slim.

I've lost track of Peter.  I think someone said he had moved out west.  I'm afraid if he were here, he'd be very disappointed.  His favorite woodland with the bottled gentian and trilliums was logged several years ago, and is now a sunny swamp with scraggly trees.

If you have a lot of room for this azalea - it is wider than it is tall - and can find it in the trade, it's a good one to have.  Its habit is loose and open, and it's rather gangly.  There are compact forms, but I like this one.  Catch it at a moment when the papery flowers are backlit by the sun, and you can see why it has  been a highly cherished wedding gift.
Posted by Martha Smith Tate at 11:00 AM