Fastigiate, but not really 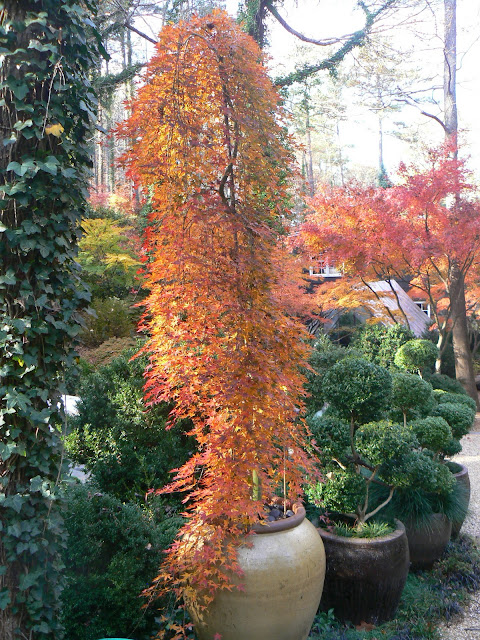 What a decision.  You would have thought I was choosing a name for a baby, the time I put into poring  over two photographs of the above Japanese maple in the foreground.  I chose this one in order to see up close how Bill Hudgins turned this normal tree into a weeping, fastigiate specimen.

The other perspective showed the same tree from farther away.  I liked that scene because you got to see the wide gravel path that runs alongside this row of containers.  It made for a better garden composition.  But with the other photograph, you lost the splash of colorful trees you see here in the background.

When I asked Bill where he found a fastigiate (defined for our purposes as a narrow, upright plant with branches paralleling the trunk) Japanese maple, he said he didn't.  He trained the tree to grow in this fashion, and I can tell you that in person, it is very striking, even when it's not in this blaze of fall color.

In the past few years, Bill, who owns a high end garden shop, has become interested in bonsai.  He is thus more at ease with manipulating the growth habit of trees and shrubs.  It took a lot of time and patience to create a narrow, weeping tree of this size.

There's something fascinating about an upright, narrow version of a tree that's normally a traditional shape with a trunk and spreading canopy.  I have a friend, plant explorer Ozzie Johnson (presently on an expedition to China), who collects fastigiate trees.  I love going to his garden and studying the leaves and needles of a tree and then all of a sudden realizing it's something familiar, but growing in this odd manner.

So far, Bill knows of no naturally occurring fastigiate Japanese maples.  But, wouldn't that be a thrill if one day someone were to discover one.  What a coup that would be for landscapes everywhere.
Posted by Martha Smith Tate at 7:58 AM