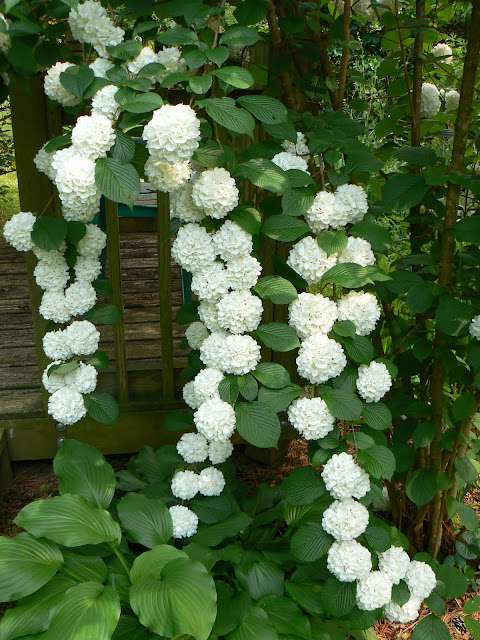 The ordeal started in the mid 1990's when I excitedly wrote in the Atlanta Journal and Constitution about a viburnum I hadn't seen before.  It was called 'Kern's Pink', and I had come across it at Don Shadow's wholesale nursery in Winchester, Tennessee.

The shrub was in full bloom in late April, maybe a bit past its prime, but you could tell that this had the potential to be a blockbuster plant.  Instead of the usual white snowball type blooms on Viburnum plicatum, the flowers were a lovely soft pink.  And the accompanying foliage had a bronzy maroon tinge.  It was a knockout, and those of us at the nursery that day (we were taping an episode of A Gardener's Diary for HGTV) were blown away by the fabulous combination of flowers and foliage.

Don Shadow said his father had obtained the plant from Carl Kern, a nurseryman in Ohio.  For decades the elder Shadow observed the viburnum, hoping it would stabilize.  The trouble was that part of the plant tended to revert to green foliage with white blooms.  In fact, the shrubs we saw had mostly pink blooms and the maroon foliage, but an occasional branch was green with white flowers.

Still, Don Shadow had grown enough to see that the plants seemed mostly stable and was willing to release them to the trade.  He did so with the caveat that the shrub might have some reversion.  So, always eager for a new and exciting plant, I contacted an Atlanta retail nursery to tell them about the viburnum.  The article came out, and the nursery was overwhelmed with requests.  They quickly sold out of Don Shadow's supply and ordered from another nursery.

I know of only one gardener who ended up with plants with pink flowers.  I'm guessing that hers came from Shadow Nursery.  But others had shrubs that produced a flower that was a sickly white with brownish-grayish-pinkish tones.  The flowers actually looked dirty.  The local retailer was gracious in refunding people's money.  I was suitably embarrassed.  The promising flower had turned out to be a dud.

The flower in the photograph above was purchased as 'Kern's Pink'.  My (now 95-year-old and still gardening) friend Margaret Moseley bought two of them.  She already had a collection of viburnums, so she was excited at the time to add a new variety.

But hers was the hideous brownish-pink flower with regular green foliage.  The retailer refunded her money, but she left the plants in place on either side of her gazebo.  Year after year, the unattractive flowers bloomed, and she vowed to cut the plants down.

This past April, I was visiting Margaret when I walked up to the viburnums.  "I'm cutting those down on Thursday," she declared. "I've meant to do it for years."

I looked at the flowers and was shocked.  Instead of the usual sickly color, the flowers were now the purest white.  Furthermore, they were cascading down the sides of the gazebo and were absolutely beautiful.

After some back and forth, Margaret finally agreed with me.  After so many disappointing years, the flowers seemed to be garden worthy after all.  She said she'd think it over.

I am happy to announce that the viburnums will live for another year, unless, of course, Margaret changes her mind.  If the plants turn out to be pure white again, I think they'll have a chance.


Note:  A few years ago, I bought some 'Kern's Pink' viburnums from Mickey Harp, another wholesaler in Inman, Georgia.  I sold the plants at a fundraiser at my church.  A guy in my Sunday School class bought some, and his have turned out to be the real thing.  The plant is also sold under the names 'Roseum', 'Roseace' and 'Pink Sensation.'
Posted by Martha Smith Tate at 8:25 AM