A corner you couldn't see 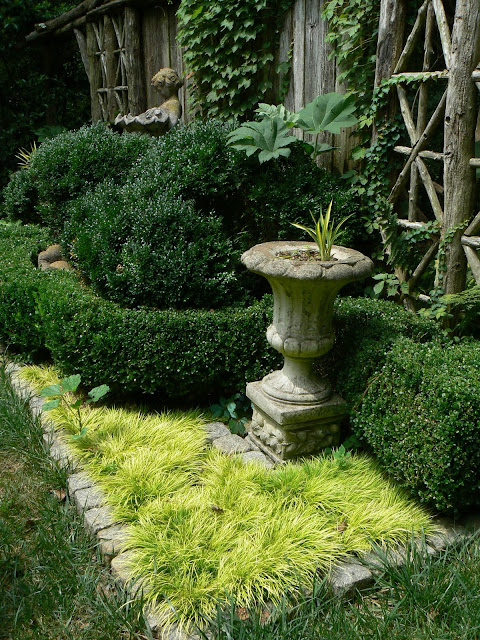 I feel like every garden I go to, whether large or small, simple or complicated, I come away inspired and having learned something new.

In an earlier post, I revisited a garden I've kept up with for years.  When I first went there over two decades ago, Ted and Pat Plomgren proudly showed off a new stone retaining wall, a rustic fence and gate and a perennial border.  As the years passed, they added (a checkerboard lawn we'll see in a future post), subtracted (a hybrid tea rose garden) and refined practically every area of their back yard.

The view of half their lower garden can be seen on this Web site under Older Posts, dated August 2, 2011.  The above photograph shows the right hand corner of the structure you see in the background in said post and gives you a sense of the details that make up this amazing garden, which is chock full of great design ideas.


What draws me to this particular scene is not just its beauty, but the simplicity of the elements.  Basically, clipped boxwoods provide a dark green backdrop for the lime green acorus used as a ground cover.  The latter fairly glows in the sunlight and contrasts nicely with the granite pavers.   In addition, the rustic wooden structure festooned with Boston ivy (Parthenocissus tricuspidata) is a perfect foil for the more formal stone urn.
But even if you didn't have a similar backdrop to play against, this is a design element that could be used up against a house or a wall or an outbuilding.  It could also be incorporated into a patio.
The Plomgrens have been generous about sharing their garden for tours.  Many of their ideas, they freely admit, have come from analyzing what others have done and then adapting the designs to their space.  "Go on garden tours to get good ideas," Ted advises.  "We've copied so many people, it's ridiculous."
Posted by Martha Smith Tate at 9:21 AM