What is she thinking? 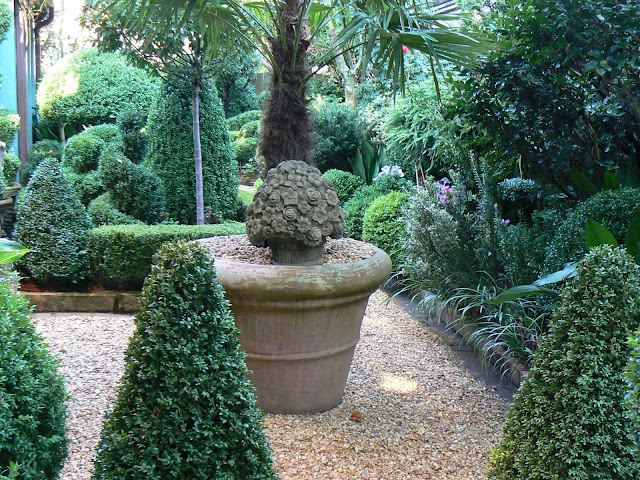 For years, I've been trying to figure out how Louise Poer comes up with ideas for her garden.  She lived in England for a time years ago, and that probably had a great influence on her.

But still, this is such a complicated garden - tiny though it is.  As I walked around yesterday (Louise apologized in advance for the fallen leaves - all four of them), I tried to analyze the components that make this such a pleasing space.  It's hard to do.

Obviously, the boxwoods, clipped into many different shapes, give the garden structure year round.  But then she's put a planter with a windmill palm - which looks tender but is hardy - in the middle of an area that is decidedly non-tropical looking.

And the boxwood cones you see in the foreground are planted in the walkway, rather than up against anything.  What made her do that?

Louise wasn't home, but in the past I've asked her how she comes up with ideas.  Like many other artists, she just laughs and says, "I don't know.  I just do what comes to my mind."

Posted by Martha Smith Tate at 8:48 AM