A walk in the parc 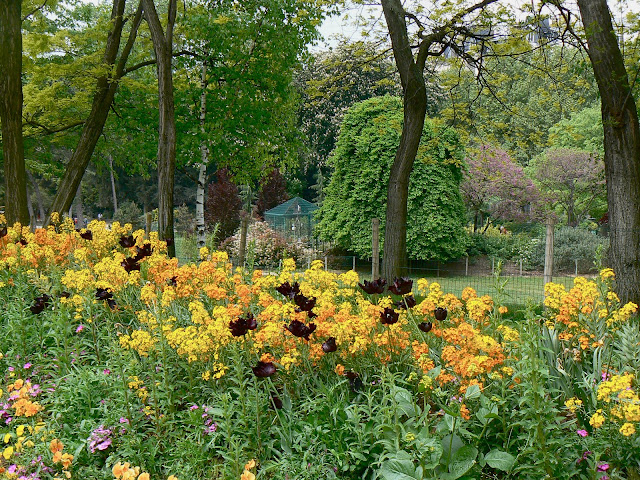 On a gray overcast day in February 1966, I stepped out onto the Tracodero in Paris, and like every tourist before or since gasped at the sight of the Eiffel Tower looming before me.  It was the beginning of a love affair with Paris.  I went on to spend a semester in Aix-en-Provence that year and fell equally in love with the south of France.
It's not that I don't want to visit other European cities over and over, too, but I just can't seem to get enough of Paris.  I worked there for a year after college and still have friends from that era.
In May 2010, I traveled to Paris with my best friend from grammar school and two of her friends.  We stayed in an apartment in the Ile St. Louis.  While they went off to visit sights they were interested in, I decided to go to some places I'd never seen but always had on my to-do list.  One was the Parc Monceau, dating from the 18th and 19th centuries, and located nor far from the Arc de Triomphe.
I think I had a map or small guide book with me, because I remember reading that the Parc Monceau had the most beautiful toilette in Paris (not that there's much competition).  It's located in the lovely classical rotunda near the entrance, and I must say it lived up to its reputation.
But back to what else I saw in the park.  I was entranced.  It was a beautiful May day, and joggers and pinickers and office workers and hoards of school children were all enjoying the park.  I thought back to long ago when I visited the more formal Jardin de Luxembourg.  I didn't know the protocol, and I sat down in one of the park chairs to watch the children with their sailboats.  All of a sudden, this elderly lady came up and demanded I give her money for just sitting down.  It ruined my day.
The Parc Monceau is much, much smaller than the Luxembourg gardens.  And, it's more informal and to my mind what a park should look like.  There is a columned pavilion around a pond with a huge weeping tree (probably a willow; I can't tell from my photograph - looks too large for a weeping cherry).  Ducks float lazily in the canals.  Both wide and narrow gravel paths wind through the park, and drifts of flowers are planted everywhere.
And the trees.  Very large, old trees with gnarly trunks; big, spreading beeches; recently planted laburnums dripping with long golden chains; chestnut trees in blossom; unusual variegated pagoda dogwoods and too many other specimen trees to mention.
The above floral display consists of yellow and orange cheiranthus (a.k.a. wallflower) interspersed with almost-black tulips.  This is a combination we could copy here in Georgia, even though you don't often see cheiranthus.  I have a friend who has large masses of it she planted from seed.  I'm not sure if it's too late to plant for next year (it's treated as a cool season annual here; if you can find the seeds, it's worth a try; plant now), but I know you can still buy dark tulip bulbs.  Cheiranthus should do especially well in places in the U.S. with well-drained soil with a high pH.
On your next trip to Paris, check out the Parc Monceau, if you haven't already.  You could take a picnic or just sit and watch the world go by.  Or, since the park has Wi-Fi, you might even get in a little Web surfing.  I like to walk around and look at all the trees and flowers and watch the ducks glide around the lovely dark water.
Posted by Martha Smith Tate at 5:47 AM