A time to plant 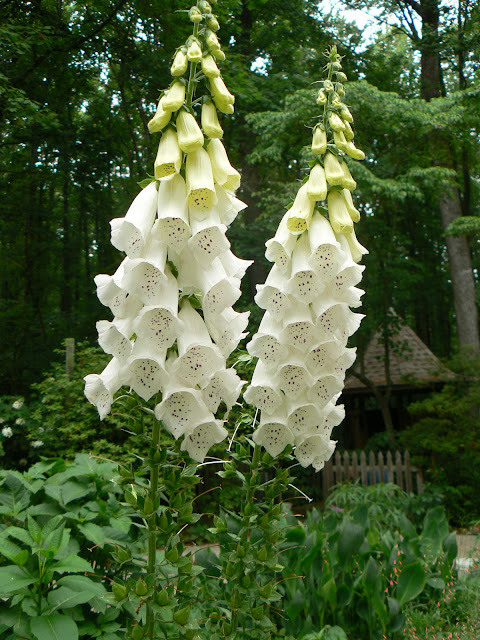 Every year that I've grown foxgloves (Digitalis purpurea), I've faithfully gathered the tiny seeds as they mature at the end of May or early June.  I usually scatter them about where they'll have a chance to catch on.  Few of them do.
But this year, just the right conditions must have occurred.  In June, I started noticing little foxgloves popping up in several places around where they'd been last year.  Years ago, I had put down some landscape cloth to try and keep the weeds at bay along a brick path.  The seeds must have loved the conditions.  The plants were thick as thieves and growing in the loose dirt on top of the cloth.
In addition, it looked as if I had a foxglove nursery in another area where I had thrown out seed several years ago.  I put bricks around the emerging seedlings to mark them, and then I realized the bricks were probably on top of some seeds that wanted somewhere to go, but couldn't.  I was right.  I moved the bricks, and sure enough, more plants came up.
Then disaster struck.  On June 18th, a tree from a neighbor's yard fell and smashed in the entire back of a little 1926 cottage on my property where the foxgloves were.  I had to call in a tree company to remove the giant oak (the neighbor's tree; my insurance and deductible, because the tree was still green).  Right in the line of fire (the path the tree men had to take to get their equipment in) were the foxglove seedlings.  Many of them were smothered by the tree's canopy, which must have spread over at least 60 feet.
I could see the seedlings down under the huge limbs and leaves, but there was no way to get to most of them.  I was able to wedge myself down in a few places and cut the landscape cloth and lift out the little plants.  They turned out to be so shallow rooted that I was not able to save them all.  For the rest, I could only hope.  However, once the tree was removed and cleaned up, I couldn't find a single one.
All was not lost though.  That other patch wasn't harmed and is growing like crazy.  In fact, I need to start thinning the plants and doing some transplanting.   I keep waiting for rain that would soften the earth, but it looks like that's not going to happen.  I need to step up the watering.
These particular foxgloves are biennials.  They will bloom next spring, produce seed and then the plants will die.  While I've heard of people planting the seeds in August and then moving the plants in October, I'm thinking the seeds need to be in the ground by June.  I'm only basing this on my experience this year.  In other years, I've neglected to note the date when the new plants emerged.
The foxgloves in this picture were grown from seed.  The gardener threw the seeds around his garden after the flower pods had dried.  Every year, he has a good crop.
Soon, the nurseries will come alive again after the long, hot summer.  When you see foxgloves for sale, go ahead and grab some.  The foliage will look pathetic over the winter as it freezes and thaws, but things will perk up next spring, and the flowers should be blooming like crazy by early May.
Posted by Martha Smith Tate at 8:02 AM