In Flanders Field the poppies blow 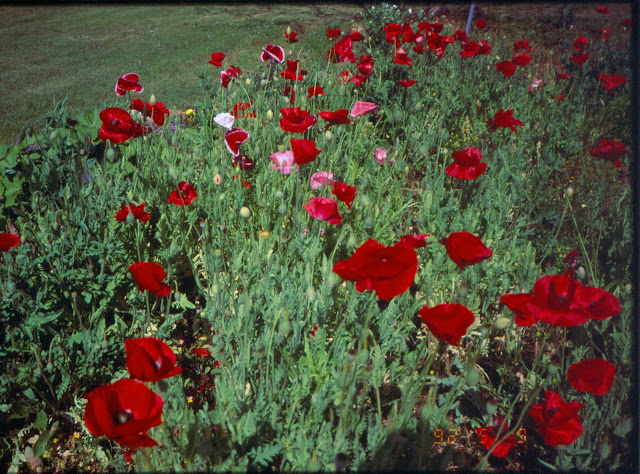 For many reasons, I have a great appreciation for the beautiful Flanders Field poppy (Papaver rhoeas) that you see growing all over Europe in the month of May.

First of all, I remember as a child walking by Moseley's store on Main Street where elderly men were selling red plastic poppies on what is now called Veterans Day (November 11).  Back then, we called it Armistice Day, referring to the day the armistice was signed in 1918 to end World War I.

Later, Mr. Adams, who owned the corner store where I bought candy bars and basically rotted my teeth out, stopped me one day and had me sit down with him and Mrs. Adams while he told me the story of the trenches.  I was surprised, as he had never said a word to me other than telling me the amount I owed him for my treats.  I was deeply touched.  He was the only WWI veteran I ever knew personally.

Also, it was because of the WWI poet Rupert Brooke ("If I should die, think only this of me: That there's some corner of a foreign field That is for ever England.") that I ended up with my husband.  Our blind date was not going well, and he was about to take me home.  At a stoplight, I said something about Rupert Brooke.  It so happened that my (future) husband had made a pilgrimage to Rupert Brooke's grave on Skyros in the Greek Islands.  We discovered that we both loved the WWI English poets (mainly Rupert Brooke, Wilfred Owen and Siegfried Sassoon), and he had all of their collections of poems and memoirs.  Instead of going home never to see each other again, we went to his friend's house where we talked until 5 a.m.  Later, after we were married, we made a trip to the trenches in France and found the grave of Wilfred Owen, who was killed a week before the Armistice.

After my husband died suddenly at age 56, I found a packet of Flanders Field poppy seeds in his desk.  Ever since, I've intended to get some seeds and plant them.  I did learn from Ruth Mitchell, the gardener featured in the pilot for A Gardener's Diary on HGTV and whose poppies are in the photograph above, that you have to have bare ground to get poppy seeds to germinate.  And here in the South, they have to be planted in the fall.

Why talk about this in August?  Because it's a good idea to order the seeds and prepare the ground ahead of time.  By next May, you should have a good stand of bright red (Ruth Mitchell called the color "lipstick red") flowers.

Posted by Martha Smith Tate at 9:53 AM