Some ideas from a Normandy garden 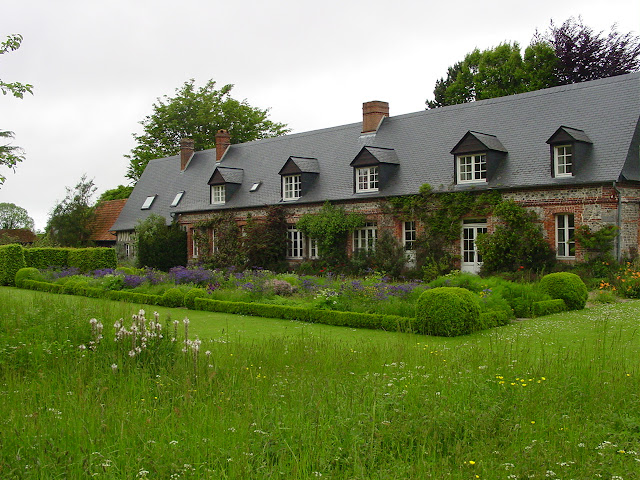 Robert Mallet, whose family owns the lovely Parc des Moutiers near Varengeville in Normandy, took my daughters and me to see a nearby garden tended by an Englishman.  I came away, my mind swirling with ideas.

This house was set in a field, with adjacent stables and a large meadow.  What the Englishman had done was create boundaries to hem in flowers in an otherwise empty space.

Coming from an area where lawns are king, it's sometimes hard to figure out how to make a yard look like a garden.  In this case, a box border was installed in front of the house to define a space.  Inside the rectangle are mostly blue perennial flowers.  There's a wide gravel walkway between the inner border and the house.

The English gardener/caretaker planted mostly red flowers or vines and shrubs with red foliage up against the house.  One close-up I have is of an exquisite deep red rose that looks like it's made of velvet.   Next to the rose is a clump of bright red single peonies.

On the right corner, the designer switched to an orange palette.  He used orange poppies, a dusky orange bearded iris (similar in color to a copper iris), a glowing orange climbing rose, copper fennel and an incredible spirea with orange flowers given to him by Christopher Lloyd (since deceased) at Great Dixter in England.

Not everyone with a large flat lawn would want to commit to a border like this in front.  But, if you had a blank space elsewhere, it might be fun to experiment with something similar to this rectangle, but maybe smaller.  I think it speaks to me because I'm basically a disorganized person, and the order the boxwood border lends to the expanse of green space is especially appealing.
Posted by Martha Smith Tate at 3:36 AM