The prettiest it's ever been 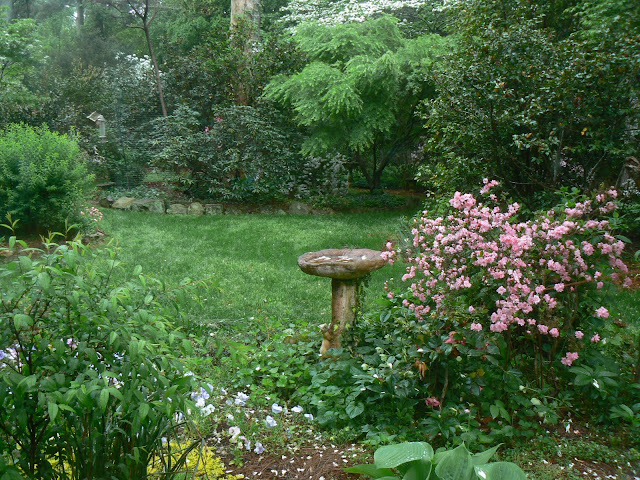 Margaret Moseley has called me at various times through the years and uttered the exact same phrase:  "You ought to see my garden today.  It's the prettiest it's ever been."  The phone call might occur on the bleakest day of winter.  But, at her house, the garden would be lit up with giant camellia bushes (or trees?) smothered in gorgeous blooms.

Many times, she's called me in November.  In Atlanta, you don't think of gardens in November.  But Margaret has so many Camellia sasanquas everywhere, plus autumn flowering cherry trees and viburnums laden with bright red berries.  She also has a big winged euonymus that turns neon red in fall.  Not to mention that the leaves on her oak leaf hydrangeas have changed to rich shades of burgundy, and the gingko at the garden entrance has turned such a brilliant yellow that it casts a glow over everything planted underneath.

Margaret's garden is hard to photograph.  It's a meandering kind of place, and there are so many wonderful areas that you can't take them all in at once.   The above photo was taken on just a regular spring day.  It was raining, but it was a magical scene, like something you'd picture in The Secret Garden.  It probably wouldn't make Margaret's "It's the prettiest it's ever been" list, but I thought it was quite beautiful.
Posted by Martha Smith Tate at 4:58 PM