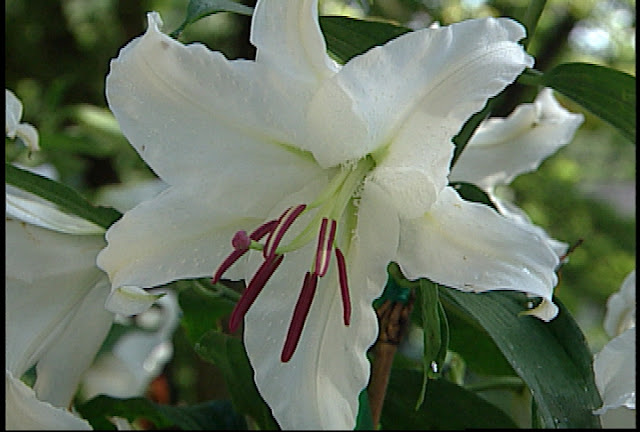 On a visit to Cape Cod in August one year, I had my jealousy meter go off big time.  My family were guests of friends who owned an historic house with wide plank floors and exquisite American antiques.  To entertain friends, they had restored a barn (where we had a huge lobster feast) and had built a swimming pool.

The grounds were amazing, too, with a grape arbor and lovely paths and lush green lawns.  But, my favorite spot (and the one that made me go green with envy) was the cutting garden.  The long, rectanglular space was enclosed by a charming tall picket fence, and inside was a riot of color provided mostly by zinnias and cosmos with a large area devoted to lilies, including the pure white 'Casa Blanca'.  Just walking near the garden made you swoon from the fragrance.  I vowed then that I would grow these lilies, too.

It did take a couple of years for me to order the bulbs, but I finally had my own flowers.  Here in Atlanta, Oriental lilies bloom in early July, so I could count on big bouquets of Casa Blancas, faded-to-green 'Annabelle' hydrangeas, purple phlox and orange crocosmia.

My lovely mother died on July 2007,  just shy of her 97th birthday.  The last year and a half of her life, she had dementia and pretty much thought I was her youngest sister.  Every Saturday, I would visit her and always take flowers.  She didn't know who I was, but she knew which flowers were chrysanthemums, zinnias, peonies, roses, lilies, etc.

In the last two weeks of her life, the Casa Blancas were in bloom, so I brought a bouquet to put in her room at the nursing home.  The flowers were a hit.  Everyone wanted the source for the bulbs.  Mother went in and out of consciousness, but she always commented on how beautiful the lilies were and how she loved the fragrance (most people don't agree on the latter; the scent can be overpowering).

Every year since 2007,  I've thought of how much pleasure those lilies brought my mother in her final days.  I have been careful to do everything to keep the deer away.  Maybe it's because they are up against the house (they're planted at a 1926 cottage behind my main house), and maybe it's because I've been strict about changing deer repellents, but the lilies have come through unscathed.

Until June 18, 2011, at about 7 p.m., that is.  I wasn't at home, but friends in Atlanta say that's what time an unexpected storm came through with what must have been straight line winds.  About a mile from here, I saw an ancient-looking tree down on a house.  When I drove into my neighborhood at twilight, I could see lots of debris.  Then, I was stopped short in my driveway by a large pine tree blocking the way.

The power was out at my house, and the dogs and I walked back to the cottage.  I couldn't get close because wires were down.  It looked like oak branches were covering the side of the house and the roof. I couldn't figure it out, because the only oak tree I was aware of was still standing.  The next morning, I walked up in the daylight.  We passed an enormous tree that had uprooted right next to the power pole and was lying in the woods.  That made me sick enough, but then I saw what had happened.  The cottage was smothered in oak leaves.  The dogs and I walked way down and around to stay away from the wires.  That's when I saw that a 100 foot tall tree had uprooted and crashed into the cottage.  The tree was enormous.  The entire back of the house was destroyed, along with the roof, chimney and a large deck.  The tree had two enormous trunks, so the canopy covered the entire house and all the side gardens.  I was sick to see that a beautiful, thick English boxwood that was at least 50 years old had been obliterated.

All this long story to say that there won't be any Casa Blanca lilies blooming this year.  They were smashed into the ground, along with the foliage of my mother's 150 year old 'Festiva Maxima' peonies, which I was trying my best to get established (they had been cut down at her house by a well-meaning person with a weed eater, and I was only able to get two pieces to survive the move).

The lilies are not a total loss.  They'll probably be back, and I can always add more.  However, I have yet to find even a fragment of the terra cotta pot with the dark maroon Asiatic lilies that bloomed beautifully in late May on the now-destroyed deck.

The tree has been removed.  The little house looks forlorn, but it can be repaired.  My loss is nothing when you think of the total devastation in Joplin and Tuscaloosa with absolutely everything gone, including lives.  That thought definitely puts a boxwood and some crushed lilies in perspective.
Posted by Martha Smith Tate at 10:18 AM